Siobhàn started her business in 1996 having identified a gap in the market for a fully dedicated wedding planning service. Her industry peers credit her with increasing public awareness of just what wedding event planning is and ending the myth that it is just for celebrities. Siobhàn is known for her creativity and sense of enjoyment. She is adamant that planning a wedding should be as enjoyable as the event itself and strives to ensure it is the case for all her clients.

Siobhàn featured on You and Yours consumer show on Radio 4 discussing the rising cost of weddings and explaining how the industry has been impacted by increasing overheads. You can listen to the show by clicking here.

5 Star Wedding Directory list Siobhàn in the UK's Top 15 Wedding Planners.
Siobhàn is one of the UK''s most lavish and established wedding coordinators...

Siobhàn was interviewed by Melanie Abbott on Radio 4's You and Yours programme, giving an insight into the effects of the pandemic on the UK Wedding sector and its clients. You can listen to the show by clicking here - Siobhàn's interview starts at 18 minutes.

Siobhàn was interviewed by BBC Radio Cumbria on the struggles businesses are facing in the Wedding sector.

Siobhàn was interviewed by talkRADIO on guidelines for weddings and the effect they are having on the industry and couples.

Siobhàn was interviewed by BBC East Midlands news on the current state of the UK Wedding sector.

Siobhàn was interviewed for a feature on the Events Industry in England starting to open up again post lockdown. Click on this link to view it.

Siobhàn spoke to Julia Hartley-Brewer during her Talk Radio breakfast show on the new guidelines for weddings in England.

Siobhàn contributed to an article for Royal Horticultural Halls regarding weddings post-Covid19. You can read the full article here.

Siobhàn was interviewed by photographer Ross Willsher for his podcast series on 'Creating the perfect wedding'.
Click 'Play' to listen to the interview.

Siobhàn was invited to speak at the SW Wed Meetup at Rockbeare Manor. 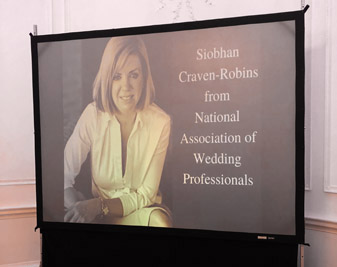 Siobhàn was delighted to be invited to speak again, this time, alongside her fellow NAWP Directors, at the Bridelux Symposium in London.
Images courtesy of John Nassari. 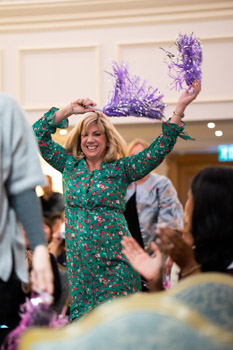 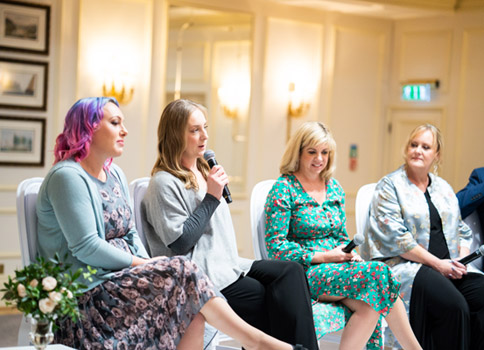 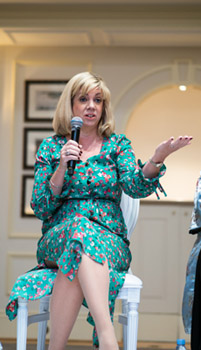 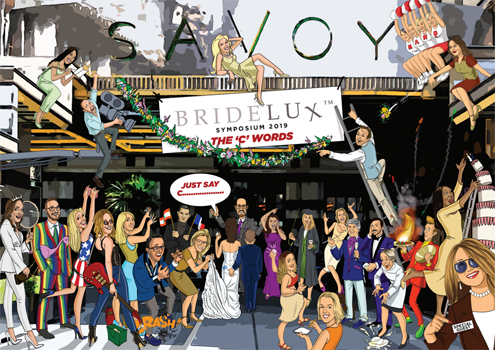 Siobhàn was delighted to be invited to be a speaker and panellist at the inaugural Bridelux Symposium in October. She spoke about the importance of networking in the UK Wedding Industry and shared anecdotes from her 22 years of Wedding Planning. She was also referenced by Alan Berg in his talk with regard to the kind of recommendations you want, and aspire, to get from clients. 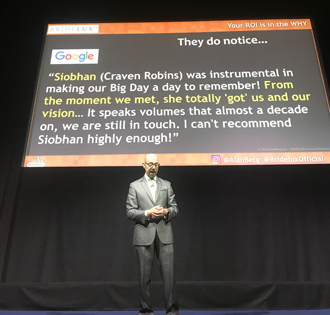 Siobhàn was delighted to speak at the Devon WedMeetup UK at National Association of Wedding Professionals' venue member The Dartington Hall Trust in October. Siobhàn gave tips on working with Wedding Planners and networking in the UK Wedding Industry as well as answering questions from the audience. She shared the stage with another NAWP member, Christine Jensen of Peboryon, who delivered a great talk on pricing. NAWP members ER Stationery and Sweet Temptations were also exhibiting at the event.
Photos by Mimosa Photography 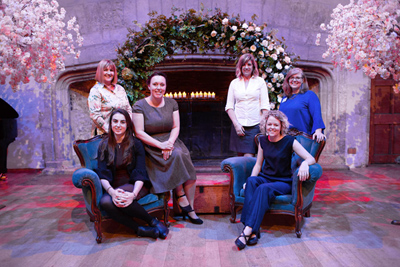 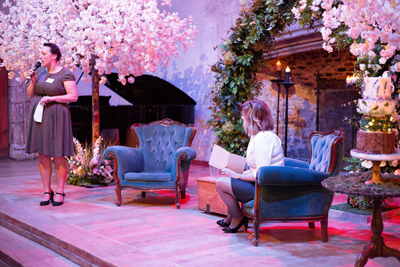 Siobhàn was invited to speak at the National Convention for Celebrants on working with Wedding Planners.

Siobhàn was interviewed on Radio 5live and BBC Radio Hereford & Worcester to give her opinion on public proposals.

To support the development of new talent in the Wedding industry, I am leading three Summer Schools in Wedding Planning this August with The Event School London. Places are strictly limited so click here to view full details and order your brochure now.

Siobhàn was interviewed on Radio 5live's breakfast show on the increased number of Bridal stores charging for consultations. You can hear the extracted clip by clicking here.

Siobhàn was interviewed by The Telegraph on the increase in Bridal stores charging for consultations. Click here to read the article.

Siobhàn wrote the foreword and contributed to Victionary's latest publication - a guide to planning your wedding. 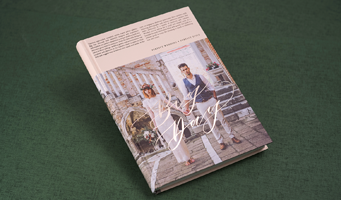 Siobhàn is a guest speaker at WedX talking about the industry changes she has seen in her 21 years of wedding planning, the NAWP, and advice on how to charge effectively for your wedding services.

Siobhàn was a judge for the inaugural UK African Wedding Awards.

Siobhàn was delighted to be a guest lecturer at the GSM graduate week in Greenwich.

Siobhàn was interviewed by UKAWEP for the Wedding Academy Live Blog. Click here to visit the Blog article.

Siobhàn became a trustee for the HEIR Foundation, a charity founded to help the underprivileged girls on the tea picking plantations in Sri Lanka. The foundation will provide career education for them specialising in bridal hair and make-up skills. Siobhàn has been recruited to help write the Wedding Business syllabus for the course.

The NAWP were invited as Keynote speakers at the Cornwall WedMeetup. Siobhàn delivered a well received talk on 'Pricing Effectively'.

Siobhàn wins the Luxury Wedding Co-ordinator of the Year award presented by the Luxury Travel Guide.

Wedding Venues and Services magazine featured Siobhàn and her fellow NAWP directors in their 'Meet the Professionals'.

Siobhàn was invited to attend the Brides Magazine 60th Ball at Goodwood House.

Siobhàn's articles on Wedding Styling featured on The Wedding Community throughout the year.

Siobhàn was invited to write a guest blog for the 5Star Wedding Directory.

Siobhàn, along with Amanda Sherlock and Lester Gethings, launched the National Association of Wedding Professionals (www.nawp-uk.com) a networking and governing body for the wedding industry.

Siobhàn was featured in a video for Tiffany & Co on modern day engagement and wedding traditions.

Siobhàn was interviewed about modern day wedding traditions by Vanessa Feltz for her radio show.

Siobhàn was the featured expert on The Fixer on BBC2.

Siobhàn filmed an informative piece for Slurp Vision on choosing the right wines and champagne for your wedding.

Siobhàn is one of the industry experts taking part in the HTE School Events evening.

Siobhàn gave a presentation at the inaugural 'The City says I Do' at 1 Lombard Street.

Siobhàn featured on the Alan Titchmarsh Show talking about weddings on a budget.

Siobhàn was one of the featured suppliers at the VOWS evening in Chelsea.

Siobhàn was on BBC Breakfast talking about etiquette and the modern wedding.

Siobhàn was one of the panel of experts along with Jennie Bond for the Freeview Royal Wedding Bloggers night at the Covent Garden Hotel.

Siobhàn featured on the Breaking news on Sky news talking about the Royal Engagement and the next morning on Sunrise with Eammon Holmes.

Siobhàn was the spokesperson for the Mercure Hotel campaign to findwedding planners for two of their hotels.

Holly McQueen's latest novel, Confetti Confidential goes on sale. Siobhàn was the Wedding Expert Holly shadowed to get insight into the life of a wedding planner.

Siobhàn featured on the Wright Stuff talking about the cost of weddings.

Siobhàn was on hand for wedding event advice at the Anoushka G Bridal Fashion Event in Soho.

Siobhàn spoke to Kath Melandri on BBC Radio London about the pressure on brides to lose weight before their big day.

Siobhàn spent the day speaking to radio stations throughout the UK on planning the perfect wedding on a tight budget.

Siobhàn hosted the Lakeside Wedding Fair and gave talks on inspiration for your wedding day.

Siobhàn gave a presentation on top planning tips and ideas for your wedding at the wedding workshop at The Belvedere in Billericay.

Siobhàn was the keynote speaker at the Wedding Professional Seminar in London.

Siobhàn was interviewed by Ann Diamond on BBC Radio London on the tradition of the wedding cake and emerging trends.

Siobhàn appeared on Big Brother's Little Brother to give an insight into planning a wedding for celebrities.

Siobhàn appeared on GMTV to discuss the effect of the credit crunch on wedding event planning and give cost saving advice.

BBC Radio London. Siobhàn was interviewed on the etiquette regarding children at weddings.

Wedding Breakfast on Wedding TV. Siobhàn featured each week with her 12 part step-by-step guide to the countdown to your wedding day.

Siobhàn is the keynote speaker at the Royal Berkshire Hotel's Wedding Workshop in Ascot.

Siobhàn was interviewed by BBC Radio Somerset on the emerging trend to renew wedding vows.

'The Wedding Experts' programme is launched on Wedding TV. Siobhàn's appears regularly throughout the series advising on various elements of planning a wedding.

Siobhàn is guest speaker at Careers and Jobs Live at the ExCeL Centre.

Siobhàn is asked to comment on the appeal for couples marrying in Las Vegas for Ancestry.co.uk 's Valentine's Day press release.

Siobhàn joined Wedding magazine as their Expert Wedding Planner, answering all the readers wedding queries in her Planning SOS page.

24th July - GMTV launch their 'Married in the Morning' wedding feature. This is the 4th year Siobhàn has been invited to be GMTV's wedding expert.

Siobhàn fronts the RAC campaign on how to get to your wedding safely and on time. Siobhàn provides her top tips for the press release as well as being interviewed on TV and Radio on the importance of transport for a wedding.

Siobhàn was asked to be the expert speaker at the HTE Schools Wedding Planning course.
On 23rd June Siobhàn was part of an expert panel along with Suzanne Neville, Bridal Dress Designer and Raj Grover, expert cosmetic surgeon that broadcast interviews to 10 regional BBC radio stations.

Wedding website The Hitching Post launched their TV show Hitched TV on Sky. Siobhàn was asked to take part in the inaugural show giving advice on planning a wedding in 2006.

Siobhàn was asked to contribute her top tips on 'fragrance and your wedding' for Davidoff's Echo perfume launch. These have featured in all the publicity linked to the launch of the fragrance.

Siobhàn was on GMTV most weeks throughout the summer as the organiser for their 2005 Interactive Wedding - her third year in a row. The GMTV wedding itself was live on television on Friday 2nd September 2005.

On May 19th, Siobhàn was the keynote speaker at the Inspire Your Life seminar in London. 'It is the first time I have ever spoken about my business and the last 10 years. I am so used to giving talks on planning a wedding but this was first for me. I did really enjoy it and was thrilled to have been asked.'

The following day Siobhàn appeared on GMTV to launch this year's Interactive Wedding. Siobhàn will design the look and theme for the wedding this year as well as appear each week giving advice on the various aspects of planning a wedding.